The following changes have been made since v3.00.00.

The set of source files and associated documents is available via the following URL at GitHub.
https://github.com/tron-forum/mtkernel_3/releases 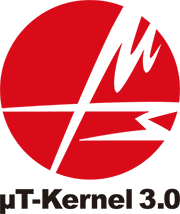